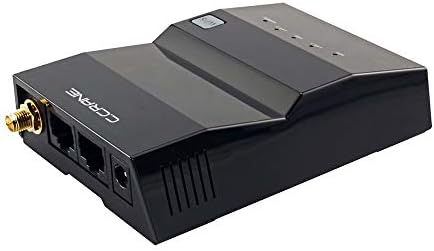 “Perfect fit for a shop or office away from my main residence. I must admit I had reservations about this setup initially, but I have had good luck with many products from CCRANE in the past. This WiFi repeater WORKS, period! Perfect solution for getting a great WiFi signal to an out building or office. Highly recommend this system.” F Haddock, Damascus, GA Includes a WPS button for quickly connecting a new WiFi device. Up to 150Mbps connection rate using 802.11n. Using the CC Vectors’ WiFi signal reduces Internet speed because it processes twice as much data. The CC Vector supports two users watching standard quality video like Netflix or several users

The system uses a directional 15 dBi parabolic antenna which reduces interference from other WiFi networks. The heavy-duty antenna with stainless hardware mounts outdoors (mast not included) to a fixed location and then is wired to the CC Vector inside. The CC Vector then delivers a new reliable WiFi signal to a new area for all types of devices.
It repeats a WiFi Signal to Multiple Devices such as: gaming consoles, Windows, Android, Apple, iPhone and Smart TVs, internet radios and more. There are also two available Ethernet jacks on the CC Vector for hard wiring additional computers or routers. It uses the most popular long distance 2.4 GHz WiFi band. The setup is simple and easy for basic computer users plus you have U.S. based support by C. Crane.
The CC Vector Long Range is typically capable of supporting two users watching SD quality Netflix or several users browsing the internet simultaneously. As distance is increased, speed is reduced.
Includes the CC X Mile Long Range WiFi Receiver, CC Vector WiFi Repeater, AC Power Adapter, 30′ USB Split Cable, Stainless Steel hardware for mounting, Sealant and Silicone Grease. Mast not included.
Note: There is normally enough speed and bandwidth for several users except for high bandwidth demands. All WiFi repeaters and extenders reduce speed because they move the data twice.

There are no reviews yet.

Be the first to review “CC Vector Extended Long Range WiFi Receiver System – Works with All Devices – Receives Distant WiFi and Repeats to All WiFi Devices in a New Location 2.4GHz” Cancel reply

Added to wishlistRemoved from wishlist 0

Buy Now
About us

bestsmarthomedevices.com is a participant in the Amazon Services LLC Associates Program, an affiliate advertising program designed to provide a means for sites to earn advertising fees by advertising and linking to Amazon.com

This website uses cookies to improve your experience while you navigate through the website. Out of these, the cookies that are categorized as necessary are stored on your browser as they are essential for the working of basic functionalities of the website. We also use third-party cookies that help us analyze and understand how you use this website. These cookies will be stored in your browser only with your consent. You also have the option to opt-out of these cookies. But opting out of some of these cookies may affect your browsing experience.
Necessary Always Enabled
Necessary cookies are absolutely essential for the website to function properly. These cookies ensure basic functionalities and security features of the website, anonymously.
Functional
Functional cookies help to perform certain functionalities like sharing the content of the website on social media platforms, collect feedbacks, and other third-party features.
Performance
Performance cookies are used to understand and analyze the key performance indexes of the website which helps in delivering a better user experience for the visitors.
Analytics
Analytical cookies are used to understand how visitors interact with the website. These cookies help provide information on metrics the number of visitors, bounce rate, traffic source, etc.
Advertisement
Advertisement cookies are used to provide visitors with relevant ads and marketing campaigns. These cookies track visitors across websites and collect information to provide customized ads.
Others
Other uncategorized cookies are those that are being analyzed and have not been classified into a category as yet.
SAVE & ACCEPT